The First Fifty Years - A History of the Chamber

Although Thailand was never a colony, being a 'farang', a non-Asian expatriate, in Pre-war Bangkok typified the lifestyle one associates with the era of Far East colonialism; the average $50 per month salary allowed for a more than comfortable living with plenty left over. A typical day started at 7:30 am and finished at 4.30 pm, i.e. before the natural light faded, you wore a 'duck' (white) suit but always carried your coat except in government buildings, and at noon each day you would pop home for 'tiffin' (lunch) and a 'ziz'- a half-hour siesta. There was no air-conditioning in those days, so a complete change of clothes was called for by the middle of the day.

In the evening you had to go up to your step-up (generator) to have any light at all and even so early in the evening it was barely brighter than a match in the room. However, just as everyone put their lights out (around 9.30 pm) and the current increased, you tended to forget and then alarms started off and bells were ringing and everyone dashed upstairs to switch the generator off before it blew up! - Dacre Raikes

Normal routine after work consisted of heading off to the Royal Bangkok Sports Club to catch up with the gossip and to play some sport, at that time the sports and social venue in town. Only the top brass and professionals were granted entry into the then highly exclusive and "toffee-nosed" British Club.

Britain was a considerable presence in those days - large investments had been made within Thailand and most of the country's external trade was controlled by the British; likewise the number of British advisers was generally greater than that of any other country. Moreover the children of Thai Royalty and the upper classes were sent to Britain for their education, which no doubt helped maintain the status of British expatriates within Thailand throughout the early years. Other European nationals were operating in Thailand, of course, and a handful of Americans, but the British to a large extent held sway. 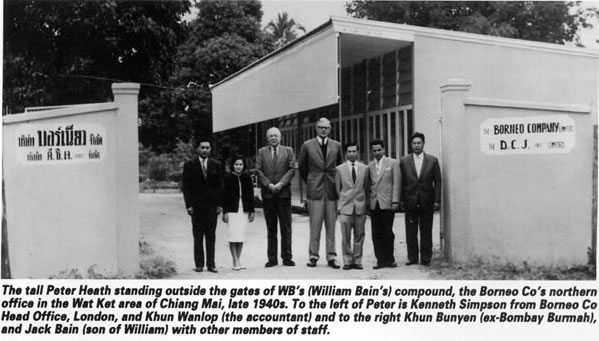 The Forest Manager of the Borneo Company's Chiang Mai operation, then R.W. 'Dick' Wood, reported to the GM in Bangkok but, owing to rather uncertain communications, ran an independent operation up north. The train ran about three times a week in the early fifties and there were some flights, but you had to move the cows and sheep off the runway before a plane could land. - Dacre Raikes

Traffic was minimal - the predominant vehicles on the few roads were pedicabs, of which there were around 20,000 (as compared to 5,000 vehicles in the whole of the country) and trams, which had been operating in the city since the turn of the century, so travel time around town was minimal despite there being only one surfaced road (Charoenkrung or 'New' Road) and one road out of town (that going to Don Muang Airport). Mobility was not the problem in Bangkok that it is today. Commercial life revolved around the network of klongs which crisscrossed the city, with most transportation between businesses and banks occurring by boat. The exchange rate was Baht 11=$1.

Speaking Thai was almost essential, so most newcomers were made to sit examinations in the language, and salary increases often depended upon exam results. These exams were held by a body called The International Chamber of Commerce, a multi-national group of foreign-owned companies in Bangkok, about whose commercial activities unfortunately little is known, but the Committee comprised some familiar names: The Anglo-Thai Corporation, Banque de l'Indochine, Barrow Brown & Co Ltd, The Bombay Burmah Trading Corporation Ltd, The Borneo Company Ltd, The Chartered Bank of India, Australia and China, D. Couper-Johnston & Co, Diethelm & Co Ltd, The East Asiatic Co Ltd, B. Grimm & Co, Holland-Thai Trading Co Ltd, The Hongkong & Shanghai Banking Corporation, Louis T. Leonowens, Steel Brothers & Co (Thailand) Ltd and Windsor & Co, several of whom would go on to contribute much to business in Thailand and shape international commercial relations.

Bombay Burmah Corporation never regarded themselves as a "trading company" dealing in such "sand and sugar" items as the others, they stuck to the forests and perhaps shipping and insurance, although they did eventually acquire a whisky agency - strictly for their own staff consumption! - Dacre Raikes

Despite a general increase in the levels of administrative competence amongst the Thai people, largely superseding the British in this role, and an upsurge in Thai nationalism in the '30s, the British remained a significant influence in Thailand right up until the war.

The Japanese arrived on the 8th December 1941. British business was finished by the 10th. The Japanese took everything over, and many remaining expatriates who were not evacuated were held in internment camps, located at college campuses and similar sites, until the end of the war. Life was not too harsh during this time, according to Sir James Holt, one of the founders of today's British Chamber of Commerce, with the Thai people reasonably accommodating to the passing of food into the camp from outside to supplement their rations. With access to books, many taught themselves Thai or other languages, but the greatest problem was boredom, filling in the hours for four years until the war ended on 16th August 1945.