Preparing the Way for a British Chamber

The period after the war was one of rebuilding, as British and other companies sent staff out to re-establish their offices and businesses. Little physical damage was done to Bangkok by the Allied bombing, so most companies had been spared. The most pressing issue of the day for British management were the enforcement of timber leases and War Claims - the reparations granted the Allied countries. The Siam Rice Agency was set up to ensure payment of the many thousand tons of rice as recompense for the Japanese occupation, and the trading companies fervently set to work exporting the valuable teak. Out of this cooperation between companies over the rice issue came the first signs of a British Chamber. 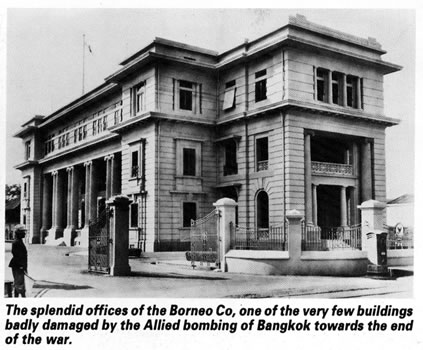 The magnificent Borneo building was reduced to rubble [by the Allied bombing], though the strong room was still intact and unopened. When it was opened up it contained a case of whisky, to the delight of those present! - Peter Heath

The pre-war International Chamber of Commerce had dissolved with the onset of hostilities, but national alliances formed in the course of the war and the pressing matter of war reparations immediately afterwards prevented its reformation, instead seeing the formation of smaller, individual-nation chambers. It can be argued that the splitting up of a united foreign front was later to be detrimental to the influence in Thailand of corporations, a point perhaps best illustrated by the close cooperation now enjoyed between the Chambers, but at the time events dictated the separation of nationalities.

The British Chamber of Commerce was founded in 1946 with 17 founders and 3 'associate' (non-British) members, largely brought about by Charles Mabbatt of D.Couper-Johnstone & Co and chaired for the first five years by Ian McEwen of the Borneo Co. Phrases used to describe the early days range from a "social club" to "positively incestuous", reflecting the extent to which the Chamber members were more intent on self-interests than in being a representative body for British commercial interests in general.

You couldn't stay late in your office in the mid/late'50s because of the lack of light, so we used to go and play tennis, but as I became more senior in the early'60s I had to stay later in the evening, but by then the lighting was better. - Dacre Raikes

War Claims were largely settled by the end of the 1940s, mostly handled by a Victor Jacques in Bangkok. Hence the fifties and early sixties were characterised by a fairly laid-back Chamber with no great cause celèbre. Minutes of the monthly meetings date back to 1960, often typed up on airmail paper in those days, when Charles Mabbatt was Chairman. Minutes were short and simplistic, not reflective of the lengthy discussions which occasionally took place due to the fact that a Thai translation of the minutes was forwarded to the Board of Trade of Thailand, therefore most items were mentioned in the barest of formats. 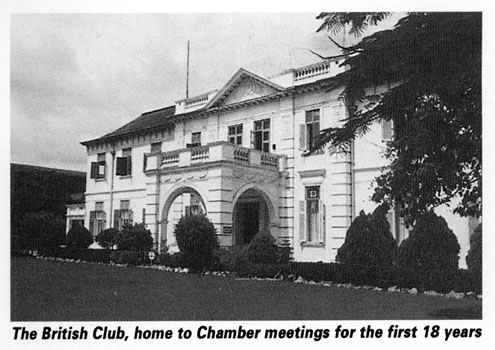 Monthly meetings were held at the British Club, which Charles Mabbatt had been instrumental in restarting after the war and had been Chairman of for some time. They focused on matters such as levels of pay and timber leases, as well as resuming the pre-war international chamber's role of supervising Thai language examinations for expatriate staff, a role which continues today. Since the Chamber's inception, the Borneo Company has played a pivotal role, with several of its executives acting as the driving force for many years as well as in the handling the Chamber's administration for the first 20 years; for the princely sum of 4,000 Ticals (old English word for Baht) the Secretaryship was handed to (usually) the Insurance Manager there. Emergency stocks - supplies of bedding, food and fuel held at the British Embassy as well as a reserve fund for loans, administered by the Chamber to help expatriates in need or in the event of political instability, were gradually disposed of in the early to mid '60s, with all monies absorbed into the Chamber kitty. While it was the considerable deterioration of these stocks and the increasing cost of their continual maintenance or replacement which had prompted the call to dissolve the Stocks, it was a reflection on the perception of increasing political stability in Thailand which allowed for their disposal.

The sixties brought about air-conditioning in the more affluent establishments at first, like the bar at the Royal Bangkok Sports Club in 1964, and it was due to the fact that the Borneo Company installed air-conditioning in their Boardroom in the same year that caused the shift in venue of the monthly meetings to there from the British Club.